We are growing and improving each year! We just cannot believe how much God has blessed our small, family business by sending such wonderful teachers, staff, and families our way. We pray for all those in our community at present and who are thinking about joining.

*Enjoy exploring our websites to see what all is going on, and don't hesitate to email scholarosa@gmail.com with questions! 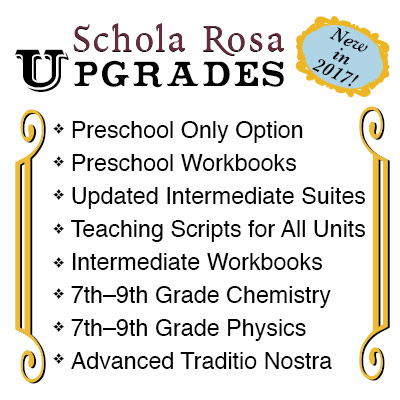 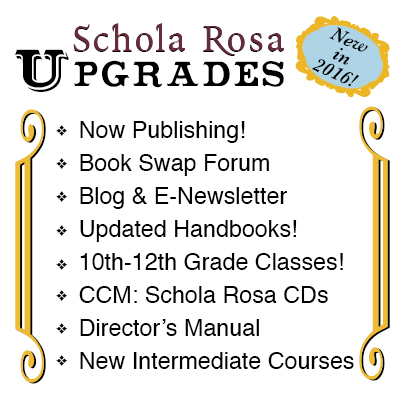 Thanks in no small part to great feedback from our current families, we are ready to announce the new upgrades coming with the 2015 edition of Schola Rosa.

The 2014 Edition
R.A.S. began an epic, editing overhaul that changed Schola Rosa's online interface for ease-of-use and aesthetics - every page was reformatted, the websites redesigned, handbooks were added. Elementary Cycle 3 was created, including a new Greek program exclusive to Schola Rosa.  R.A.S. negotiated with Classically Catholic Memory, LLC to bring CCM directly into the online curriculum, including audio files. A special CCM-Schola Rosa edition was created by R.A.S, drawing upon the original CCM materials but altered to fit our philosophy and sequence. The Elementary subjects of science, history, religion, and preschool were upgraded, which involved the addition of over 700 pages of new content! Schola Rosa forums were added to the Elementary cycles for families to share ideas. The Intermediate Traditio Nostra 3, Advanced Logic & Rhetoric, and Latin 2 were added with Teaching Scripts. Teacher Training with Live webinars with R.A.S. staff was initiated. R.A.S. negotiated discounts for Schola Rosa Families with Catholic Textbooks Project, Little Latin Readers, and Real Science 4 Kids.  Director and Teacher Training were developed. ~ 14 Co-ops in the USA and Canada; 200 families

The 2013 Edition
Schola Rosa: Co-op & Home Curriculum is launched!  Elementary Cycles 1 and 2 were created and opened in the summer of 2013. This included original materials written by R.A.S. for history, art, language lessons, Latin, and virtue. The "Digital Library" was created for each cycle to offer for the first time digital books and audio books as well as the Our Holy Faith Series, Ray's Arithmetic, and The Eclectic McGuffey Readers. The Intermediate Courses for Traditio Nostra 1 and 2, Logic, and Latin 1 were offered with "Teaching Scripts." ~ 10 Co-ops in the USA; 140 families

The 2012 Edition
In 2012 R.A.S. was contacted by several co-ops and companies who were familiar with our online classes and who wanted to have a program for their 7th-12th grade students in a co-op setting.  R.A.S. field-tested the Traditio Nostra courses in 2 co-ops and explored the possibility of developing a curriculum.  Eventually, we decided to create an Elementary program and provide a full curriculum option for all ages ourselves. The Elementary subjects of history, art, science, language lessons, religion, preschool, and virtue were tested for Cycle 1 in a large, 21-family co-op that Alecia Rolling directed. CCM was used in conjunction with these materials and integrated into the lesson plans.
Our earliest logo ideas were developed in this year. The image to the left is one option that did not make the cut.