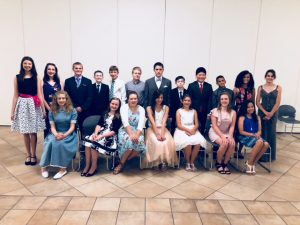 May 22-23, 2018 were a big couple of days for the Broken Arrow Schola Rosa Co-op, which Alecia Rolling was privileged to share in as a speaker, attendee, and comrade.

The Broken Arrow Intermediate Group has been active for 5 years now, and just this year formed the very secret, Thomas Aquinas Society, for its Intermediate members. The year culminated with a Scholar Ball and was a great opportunity to celebrate the achievements of older students as a separate event from their younger siblings’ Potluck Raffle and Rewards. Mrs. Rolling was invited to attend the Scholar Ball as a speaker to the 6th-7th graders.

In addition to the Scholar Ball, Broken Arrow co-op members scheduled workshops to precede the ball, the workshops being for the parents of the group. This allowed parents an opportunity for academic growth as well by hosting a speaker and having discussions.

Attendance at the workshops was 100% with some new faces who joined in. Mrs. Rolling gave talks on the following topics and a vigorous round of discussion followed each talk. Later in the evening Mrs. Rolling and the ladies of the co-op went out to eat and to enjoy some informal conversation and fun.

“The moral virtues are acquired by human effort. They are the fruit and seed of morally good acts; they dispose all the powers of the human being for communion with divine love” (CCC 1804).  Virtue training is the boot camp of sainthood. Learn the nuts and bolts to help you on your way and to give you the humility to guide your children.

One of the great difficulties of the home school is learning how to contend with the new set of challenges that emerge around seventh grade.  The many monsters of middle school include rebellion, tough questions, lack of motivation, the loss of learning as fun and the beginning of it as work, the need for greater teach expertise, and the necessity of new study skills and independence.  What are practical tactics in the parents’ arsenal for defeating these monsters and helping them be studious and virtuous? 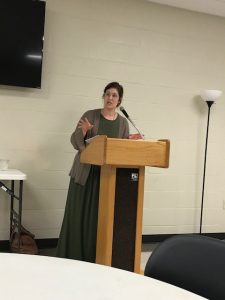 The Workshop Room with Attendees

Finally, the big night for the teenagers and their parents and grandparents arrived. The Broken Arrow Co-op families put together a fine dinner and atmosphere to celebrate the academic and moral achievements of their local teens, who worked diligently throughout the year, both on academics and on moral development. Mrs. Rolling addressed the students, placing their work in perspective with their life work with a speech entitled: “Hugh of St. Victor and Education.” Afterwards, awards were handed out by the students’ moderator, who highlighted specific student achievements for the year, both accomplishments within the Schola Rosa curriculum and without the co-op. Some students, for instance, had contributed greatly to their local community, even heroically, deserving of a reward.  As a personal touch, each student had a display along one wall of the dining hall that offered pictures and stories to tell about each. 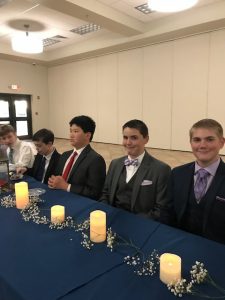 Students sitting at the Scholar Table 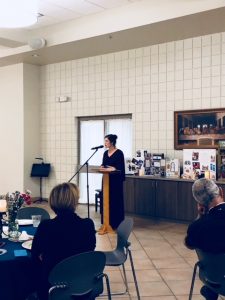 Mrs. Rolling speaking to the Scholars 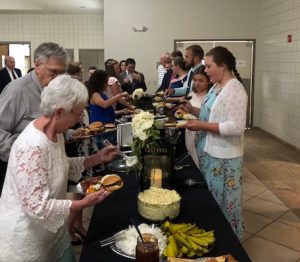 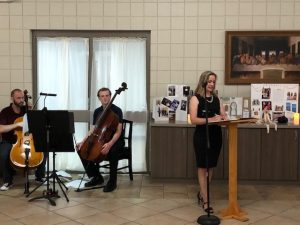 We are grateful to have had the honor of participating in these events and the greater honor of being a part of these families’ daily studies. May the Lord continue to bless this group with great success.