The Digital Book Saint Gregory the Great by Sisters of Notre Dame Audio by Barbara Meyer has been added to the Cycle 2 Online Suite Digital Library. 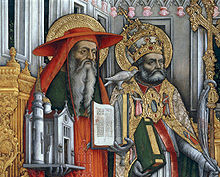 Foreword from the Book:

The distinction between intellectual Catholicism and popular Catholicism has been made more than once in an invidious spirit of destructive criticism.

We need not reject in principle this distinction; but there is no earthly reason for our opposing popular Catholicism to intellectual Catholicism. Christianity has indeed an immense attraction for what is best in man’s intellect, but it has also a distinctly popular side. It is a life full of poetry and romance, replete with practical issues; it has all the charm of true myths without any errors; it is a religion which a whole people may make into a racial and national thing, in the true sense of the terms, with traditions and heroes and wonders and miracles far beyond the imagination of the ancient mythologies. If Catholicism be truly the presence of the Son of God amongst Bien, the marvellous, far from being the unusual and exceptional, ought to be the natural atmosphere in which a Catholic people has its being.

It has always seemed to me that St. Gregory the Great is the most perfect embodiment of that happy union of intellectual and popular Christianity. St. Gregory is truly one of the Church’s great Doctors, a worthy successor of St. Augustine of Hippo in the supremacy of mind.

St. Gregory’s contribution to Christian theology is immense. But St. Gregory is also the author of the book of the Dialogues, that wonderful and fascinating compilation of the pious legends of his period. St. Gregory is the great administrator whose genius for ruling no man has ever doubted, yet he is best known to us as the teacher of sacred music, surrounded by juvenile choristers whom he initiates into the mysteries of ecclesiastical psalmody. The Holy Ghost, under the figure of a Dove, is perched on his shoulder in order to keep him from erring, not only in matters of Faith but also in matters of musical harmony.

The voluminous writings of St. Gregory, his vast epistolary activities, reveal to us a Catholicism both intellectual and popular, which has not changed since his day. In every page of the Dialogues, for instance, you find anecdotes which fit to a nicety into the Catholic life of an Italian village of our own day. We act, we pray, we believe, we fear, we hope, as did the Catholics all over the world in the days of St. Gregory. We say Masses for the dead, we expect the deliverance of souls from Purgatory, we believe in the miraculous, in small things and in great, as did the people who figure in St. Gregory’s Dialogues. Our infidelities to grace and our shortcomings are the infidelities and shortcomings of monks and nuns and other good people who tried their best for the love of Christ in the Italian towns and villages, of which St. Gregory makes such an elaborate and accurate enumeration. Many go straight to Heaven at death, in the days of St. Gregory, perhaps oftener than we dare to hope in our own days. Many there are who are seen in the flames of Purgatory asking for Masses and confessing the peccadilloes that made them unworthy of a speedy ascent to Heaven. St. Peter is seen assisting at the death bed of some favourite client of his, whilst on the other hand, some careless Catholic is frightened out of his wits by the presence of the old enemy when the last hour approaches. There are haunted houses, and houses full of angelic influences; there are miracles of the first magnitude, and there is divine intervention in favour of the Christian housewife whose hens are being stolen by a wily fox. In a word, St. Gregory’s fertile pen portrays for us a complete, all-round, healthy Catholic life, such as the Middle Ages have known it, such as we love it ourselves. The background of all that multitudinous life of intensely practical Christianity is the monumental assertion of the intellectual truths of our Faith.

Anyone who makes us love St. Gregory the Great does our Faith a great service. The present well-written volume cannot fail to endear the great Pope to every reader. But we ought not to stop there: we ought to read St. Gregory himself. There are good English translations of large portions of his works. The Dialogues, for instance, are accessible to everyone. St. Gregory’s charm is contagious. You seem to be living in the sixth century, and you feel that you have met in your own lifetime the very class of people whom St. Gregory describes so well.

The great Pope was surrounded on all sides by the ruins of the Roman Empire; the Roman Eagle had lost “all its feathers.” Gregory felt this great downfall most keenly, as he was a Roman of the Romans. Yet there is a constant vein of optimism in his view of things. There is a kind of playfulness of divine mercies which gives a charm even to such reprobate barbarians as Totila, king of the Goths. The heathen Barbarians were putting Catholic Italy to fire and sword; and Catholic Italy, full of faith in God’s mercies, smiled at the Barbarians and converted them to the Faith of Gregory, the successor of Peter.